As soon as he was out of puppiehood, Fletchie was in charge.  He knew what time the alarm went off for work and made sure that we were up before that.  Did you ever wake up to a poodle face looking down through big furry ears into your eyes?

When Fletchie thought it should be our bed time, he would go to our bedroom door and bark once.  And then if one bark was not enough he would sulk into another room.  You could hear him thinking “stupid humans”.

It is our custom to have our morning coffee on the porch next to the pool, read the paper, and chat.  Initially, Fletch would lay looking at us as we talked and try to talk.  I am not talking about barking, but rather modulating sounds with his throat and mouth.   In disgust, he finally gave up, but would lay facing us and listen intently as if he understood every word. 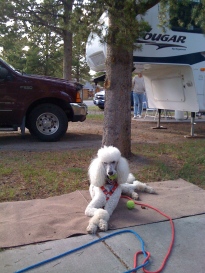 He didn’t care for other dogs.  After all, they were dogs.  And, he was, after all, a little old man merely in a dog suit.