Since we have thumbs, does that mean that the dieties want us to text?

If Fletchie was our little old man in a poodle suit, Alfie was the love doctor. 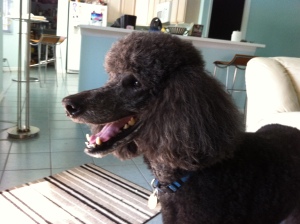 Alfie was a pistol to train, and by that I mean housebreak. He just didn’t care where he did his business liquid or solid. I don’t really think that he associated his bodily functions with himself. For example, Alfie didn’t really stop to perform his bodily functions. He would lift his leg on a tree and keep right on walking. He would be hunting and suddenly spin in a circle releasing a semicircle of droppings. If you brought the error of his ways to his attention, he would have his feeling hurt. He did learn that it upset us when he did his business inside. So, in true poodle fashion, he would urinate on our kitchen waste basket when he felt he had been wronged. Wronged usually meant that we had stayed away for too long or had taken Fletch someplace without him. He finally did housebreak himself. From then on he only peed in the house to punish.

A thousand lizards – he didn’t eat them, just wore them out playing with them,

Two toads – he gave those up because they made his mouth foam,

One squirrel – his proudest achievement,

One young cat – saved from Alfie by one screaming spouse, and

One old white tom whom he never caught but scared the bejeezus out of on a regular basis.

This old white tom has been in our neighborhood for at least ten years. He was used to dogs chasing him. What he did not anticipate was an arial attack. He had taken cover and was prepared to wait out Alfie, when Alfie leaped into the air an landed on top of him. The old tom lost his cool. He leaped arching and hissing into the air all fluffed out like a bottle brush and tore off across the street. Suddenly, he turned around, laid his ears back and gave Alfie a look that would kill. This was not the way cats and dogs did their thing. The cat runs, the dog chases, the cat goes up a tree and grins with great superiority down at the dumb dog.  Not this black devil.

As I mentioned in an earlier tweet, Alfie had only two speeds – full on and off. He had laser focus when he was hunting. He modeled Nike’s motto, “just do it!”. One day we were walking, and he saw a lizard in a young tree about four foot off the ground. Off he went leaping into the tree and there he hung caught in a fork in the tree still staring at the lizard. When following a scent, he frequently ran into things like garbage cans, signs, pickup trucks, etc. Sometimes he would hit them so hard he would knock himself down. When this happened, he paid no notice. Like I said, he had laser focus.

On Fletchie’s passing Alfie took on the role of “senior poodle” along with all the rights and privileges that accrued with the title. He became our constant companion since he was friendly with other dogs and humans. His favorite social outings were: walking at the lake front, having coffee on the patio outside Starbucks, and HomeDepot. He was so popular at HomeDepot that they gave him his own HomeDepot work apron with his name on it.

He is greatly missed.

It has been probably several years since my spouse and i have flown.  And, how things have changed.

Really, in this war against terrorism, they have won.  I would like to see how many terrorist plots have been avoided by my taking off my sandals, or my limitation on shampoo, or bottles of water.  We have become a nation of chickens believeing we can live in a bubble.

Why do we go to these extremes to prevent foreign terrorism, and then do nothing about domestic terrorism.  We cannot even get the government to pass a law for background checks.

I theorize that the answer is money.  The TSA and its arsenal of electronic devices has to be one of the biggest government/civilian industrial complexes.  Contractors must be making a mint.

Our plane was dirty and smelled of old urine.  I hope this was an unusual situation but I suspect that it wasn’t.

Since it has been awhile since we flew, we went to the airline site to see what thier baggage policy was.  Acording to their site our old carry ons were too large.  So, we packed into a back pack.  Of course as we boarded we saw people using carry-ons larger than our old one.  Even the sign about carry-ons was different from the website.

As we were traveling for an extended stay, we had a lot to take with us.  Should we pay extra for a second checked bag?  We boxed our stuff and sent it UPS.  Guaranteed delivery and no lost luggage or going through the baggage claim rush.

Stewardesses were as pleasant as underpaid Walmart cash register clerks.

We arrived at our destination in the shortest period of time and almost on schedule. Would I fly again?  Only if it couldn’t be avoided.

Over the last two decades i have been listening to politicians, particularly Republicans, tout they and their party as the party of family values.  This has won them the unquestioning support of the religious right.  And that “unquestioning” is the problem.

Over the last two decades the right has opposed every teaching of Jesus Christ in their political actions.  They consistently oppose helping those who are in need.  And, yet, the Christian right, whether Republican or Democrat, has continued to support them.

So,  what do Christians say when they are asked “What would Jesus do?”,  they say nothing.  For, if they have not opposed those politicians who do not follow Christian beliefs in their actions; they are as guilty of hypocrisy as the politicians.  If they continue to support financially and vote for politicians who hypocritically call themselves Christians, are they not themselves opposing the teaching of Christ?

I feel sorry for Christians because they can no longer have it both ways.  They can no longer support the politicians of the religious right and still claim to promote the teaching of Jesus Christ.

I really am sorry for them.  No person should be so grieviously taken advantage of because of their religious beliefs.

The clue to how to change conservative justice(s) opinion on abortion, contraception, and women’s rights lies in their vote on a recent decision by the court. That case was: Riley v. California in which the court ruled unanimously that police needed warrants to search the cellphones of people they arrest.

I, along with many others, attribute this apparent contradiction on limitation on police power to the fact that all of the Supreme Court justices, including the conservative five, have and use cell phones. Their aids use cell phones and therefore, they understand the need for privacy.

Based upon that peek into how they think and rule, I make the following suggestion.

We need to get these old white men hooked up with some really hot young chicks of child bearing age. They should also be professional women; no, not that kind of profession. I mean women who work in business or finance or industry who are single mothers trying to support a family and need their reproductive rights protected. Or, they could be unemployed single mothers not wanting anymore children. Or, they could be women who are trying to survive with their family on minimum wage and cannot afford another child or health insurance.

Perhaps if they were as familiar with the plight of women, who are not the wives of Supreme Court Justices, as they are with cell phones, they would think differently when they rule that a company can discriminate against a woman on religious grounds.

Was Thomas Paine looking into the fortune teller’s lens when he penned these words?

“THESE are the times that try men’s souls. The summer soldier and the sunshine patriot will, in this crisis, shrink from the service of their country; but he that stands it now, deserves the love and thanks of man and woman.”

Today, we experience the tyranny of the minority; and like Payne we must dedicate ourselves to fighting it.  Fighting it not with musket and ball, but rather by fighting it with the vote.

And yet, Republican legislatures in state after state are passing laws whose intention is to disenfranchise voters.  Some even argue that voting should be limited to white land owners.  When one takes a holistic view of the framers and the Constitution, the opposite is intended.  The intention has always been and ought to be to extend the right to vote to all citizens.

Our country was founded on the concept of rule of law.

Our country was founded on the principle of majority rule.

And, it is the responsibility of the majority to protect the rights of the minority.

Our founding fathers could not have conceived that citizens, much less elected officials, would try to destroy the Constitution instead of preserving it.  They provided ways for the majority to change or amend the Constitution.  They did not intend to provide a legal means for the minority to tear down what the majority wanted.  They could not have anticipated this type of tyranny.

Time after time we have seen these legislatures go against the will of the majority of their constituents, whether it was over backround checks or immigration.

We have a Congress that does not want to legislate and work for the majority of the people; they just want to work for their political donors.

These truly are times that try men’s souls.

GET PEOPLE REGISTERED THEN GET OUT THE VOTE!

SCOTUS has ruled that to be able to deny coverage under the ACA, the privately owned company must hold a “sincere” belief.

If a closely held company, such as HobbyLobby, sells products which are produced in countries that allow, if not support,abortion; can HobbyLobby keep its sincere status?

If a closely held company, such as HobbyLobby, uses providers of any kind who provide insurance which covers birth control are they sincere in their held beliefs?

If a closely held company, such as HobbyLobby, sells its products to businesses who provide insurance to their employees which covers birth control, are they really sincere in their religious beliefs?

If a closely held company, such as HobbyLobby, sells to individuals who have insurance that covers birth control, or uses contraceptives, are they really sincere in their religious beliefs?

If they are selective about whom they discriminate against because of their religious beliefs, are they “sincere” enough to be exempted from the Affordable Care Act.

We know that HobbyLobby, at the least, puchases a lot of their merchandise from China.  The government of China supports birth control and abortion.  Could any company who sincerely is against any form of abortion, in good faith, engage in commerce with China or any other company which allows abortion or contraception?

CHECK OUT THE INVENTORY THE NEXT TIME YOU ARE IN A HOBBYLOBBY.  SEE IF THERE IS ANY MERCHANDISE FROM A COUNTRY WHICH ADVOCATE ABORTION OR CONTRACEPTION.

Are they only “sincere” in their religious beliefs if they inprove their bottom line?  If that is the case, are they hypocrites?