If Fletchie was our little old man in a poodle suit, Alfie was the love doctor.

Alfie was a pistol to train, and by that I mean housebreak. He just didn’t care where he did his business liquid or solid. I don’t really think that he associated his bodily functions with himself. For example, Alfie didn’t really stop to perform his bodily functions. He would lift his leg on a tree and keep right on walking. He would be hunting and suddenly spin in a circle releasing a semicircle of droppings. If you brought the error of his ways to his attention, he would have his feeling hurt. He did learn that it upset us when he did his business inside. So, in true poodle fashion, he would urinate on our kitchen waste basket when he felt he had been wronged. Wronged usually meant that we had stayed away for too long or had taken Fletch someplace without him. He finally did housebreak himself. From then on he only peed in the house to punish.

A thousand lizards – he didn’t eat them, just wore them out playing with them,

Two toads – he gave those up because they made his mouth foam,

One squirrel – his proudest achievement, 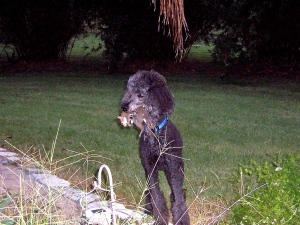 One young cat – saved from Alfie by one screaming spouse, and

One old white tom whom he never caught but scared the bejeezus out of on a regular basis.

This old white tom has been in our neighborhood for at least ten years. He was used to dogs chasing him. What he did not anticipate was an arial attack. He had taken cover and was prepared to wait out Alfie, when Alfie leaped into the air an landed on top of him. The old tom lost his cool. He leaped arching and hissing into the air all fluffed out like a bottle brush and tore off across the street. Suddenly, he turned around, laid his ears back and gave Alfie a look that would kill. This was not the way cats and dogs did their thing. The cat runs, the dog chases, the cat goes up a tree and grins with great superiority down at the dumb dog.  Not this black devil. 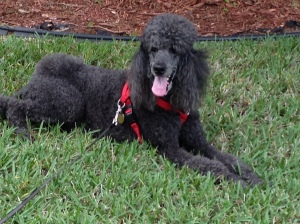 As I mentioned in an earlier tweet, Alfie had only two speeds – full on and off. He had laser focus when he was hunting. He modeled Nike’s motto, “just do it!”. One day we were walking, and he saw a lizard in a young tree about four foot off the ground. Off he went leaping into the tree and there he hung caught in a fork in the tree still staring at the lizard. When following a scent, he frequently ran into things like garbage cans, signs, pickup trucks, etc. Sometimes he would hit them so hard he would knock himself down. When this happened, he paid no notice. Like I said, he had laser focus.

On Fletchie’s passing Alfie took on the role of “senior poodle” along with all the rights and privileges that accrued with the title. He became our constant companion since he was friendly with other dogs and humans. His favorite social outings were: walking at the lake front, having coffee on the patio outside Starbucks, and HomeDepot. He was so popular at HomeDepot that they gave him his own HomeDepot work apron with his name on it.

He is greatly missed.

Daily Devotionals on Writings Received from the Celestial -- A COURSE IN MIRACLES, A COURSE OF LOVE, THE WAY OF MASTERY, and CHOOSE ONLY LOVE

is the journey of souls

The Philosophy Blog of Steven Colborne